Some human marvels are made, not born. Often their manufacture is accidental and painful, such is the case of Leonard Trask. Born on June 30, 1805 in Hartford, Maine Trask suffered a major neck injury in his 20’s when he was thrown from his horse. The story was that a pig ran under the hooves of his horse and, after being thrown from the back of his steed, Trask spent several days crawling back home. Despite the serious injury, Trask continued to work as a farm hand until his spine began to bow.

Soon, Trask’s chin was pressed into his chest permanently, and subsequent injuries only exasperated his misery. In 1840 he took a nasty fall and in 1853 he was thrown from his wagon and broke 4 ribs and his collarbone. On May 24, 1858 Trask was involved in a high-speed coach accident, in which he and several passengers where thrown to the ground. In the accident, Trask struck his head and opened ‘a gash in his head five inches long’. The injury was severe, and he was not expected to survive, but he did and was even more disabled and miserable as a result of the injury.

Through much of his adult life, his wife took care of him, and despite his physical limitations he fathered seven children with her. Unable to work, Trask was eventually able to spin his status as a medical curiosity into small career as a human oddity attraction to the general public. As “The Wonderful Invalid”, Trask was able to capture a small measure of fame. His 1860 self-published story A Brief Historical Sketch of the Life and Sufferings of Leonard Trask, the Wonderful Invalid, which included accounts of his activities like ‘Mr. Trask at the Circus’ and ‘Mr.Trask Going to Drink’ that were both amusing and sad.

At the time of his death on April 13, 1861 Trask’s condition was still not officially diagnosed despite seeing more that 22 doctors during his lifetime. Today Trask would be diagnosed with Ankylosing spondylitis, a condition that affect less than 0.2% of the general population.

You can read A Brief Historical Sketch of the Life and Sufferings of Leonard Trask in it’s entirety here: https://archive.org/details/briefhistoricals00port 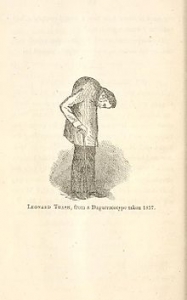 THE OSTRICH PEOPLE OF ZIMBABWE

The topic of ectrodactyly has been discussed in the past on this very site. The story of Grady Stiles Jr. detailed the condition at length but, to summarize, ectrodactyly is a rare congenital deformity of the hand where the middle digit is missing and the hand is cleft where the metacarpal of the finger should…